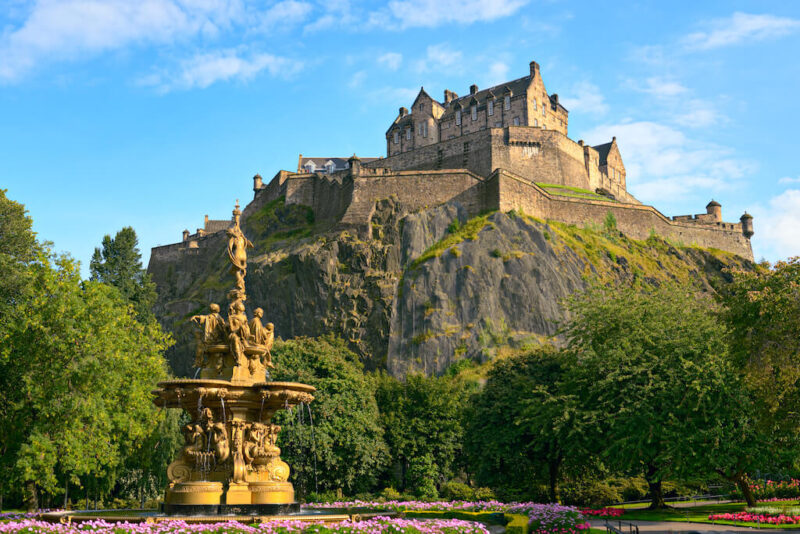 Most of our tours start at the port of South Queensferry, although we are able to pick-up Leith and Newhaven too.

Your day starts by taking the tender ashore to South Queenferry, a picture postcard village just outside of Edinburgh. Your guide will be waiting for you just as you come off the pier and escort you to our mini-coach, where your day’s adventure will begin!

Spend the morning exploring Edinburgh, including the Castle and the Royal Mile

We spend 4 hours in Edinburgh to give you time to soak up the city’s history and culture. We will drop  you off close to the Royal Mile and Edinburgh Castle. For those wishing to visit the castle you can pre-book this with us to save time waiting in line. Close by there are so many things that you can see and do including the National Museum of Scotland (amazing and free!).

Your guide will bring the city's historic streets to life.

An optional free 1 hour walking tour for those who would like to learn more about the city’s past.

One of Scotland's most beautiful towns and an Outlander filming location.

After crossing over the Firth of Forth and its iconic bridges, we arrive at the village of Culross. The village is the best preserved example of a ‘burgh’ from the 17th and 18th century and is definitely a highlight of any visit to Scotland with its white harled houses and cobbled streets. Widely acknowledged as one of the most scenic villages in Scotland, it is perhaps unsurprising that it has featured on many film and TV shows, most notably Outlander, where scenes for both season 1 and 4 were shot.

We will spend around 90 minutes in Culross giving you ample time to explore the village and visit some of it’s highlights including Culross Palace (optional extra).

Time permitting we make a final stop of the day at Dunfermline, where we usually spend around 45 minutes. You can explore the historic Palace and Abbey (admission charges apply although you can view from the outside free of charge) and visit the birthplace of one of the world’s most successful industrialists, Andrew Carnegie.

We are currently preparing our 2021 schedule. Please get in touch for details!

LOCAL EXPERTISE
Local owners, guides and knowledge for a truly authentic experience.
FAMILY-RUN
11 years of tours and our aim is the same; to provide a WOW experience every time.
GUARANTEED DEPARTURES
Tours always depart, whether with 2 or 20 guests, so you can book with confidence.
SUSTAINABLE TOURS
Choose to tour with a company who are serious about preserving the Highlands.
BEST GUIDES
Our highly experienced team will ensure you go home with memories to last a lifetime.
COMFORT FIRST
Our custom-designed vehicles offer the highest levels of passenger comfort.

Gordon founded WOW Scotland in 2010 and hasn’t looked back since. He loves talking about the Scottish Highlands, both on tour and on the TV and radio.

Prior to being a tour guide, Rob ran successful food and tourism businesses in Edinburgh and Perthshire. He has now been in the Highlands for 16 years, where he loves to indulge in his joint passions of golf and hiking.

Join us on our award-winning tours