Tour with confidence from July 15th! Click for more details

Just get in touch with us so we can tailor an experience to suit you.

by more than 1,600 happy customers #1 OF 94 INVERNESS TOUR COMPANIES 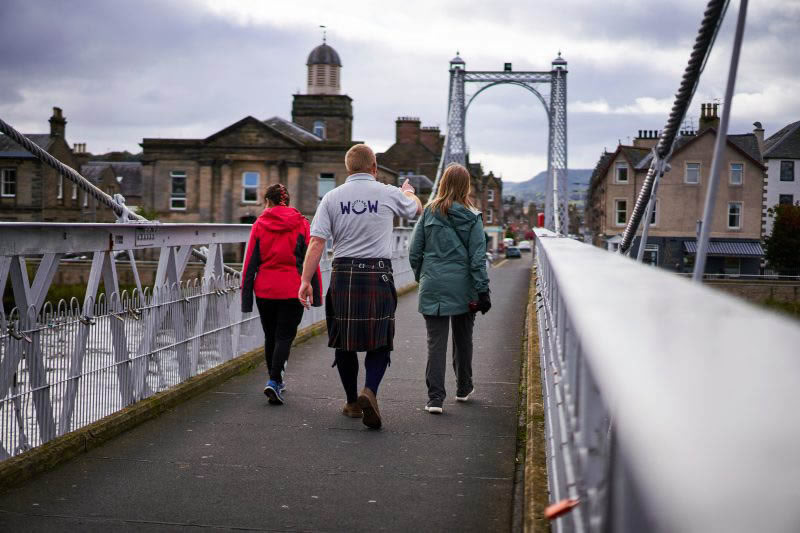 Our starts next to the Flora MacDonald statue, which stands in front of Inverness Castle. There are so many great stories to tell here the most difficult part is working out which ones to share! Expect tales about the battle started over cheese, flying dogs, fake castles plus lots more!

Inverness Castle was built in 1836 as a prison and a courthouse, although its history extends back a lot further than that. The earliest castle was probably built on the site around 1000 years ago, and boy has a lot happened in those thousands years!

The Wychway and the Three Virtues

For many people, witch craft is not something they necessarily associate with Scotland. However, witch hunting in Scotland was widely practised with many a poor innocent soul being put to death for alleged crimes. In fact, local, our witches had a bit of notierity, with Isobel Goudie being the first ‘witch’ to come up with the notion of their being 13 witches in a coven! We’ve also got a very famous witch hunter we’ll tell you about to and the rather dubious methods ‘he’ used to extract a confession. In addition, you’ll see the location where two of the last witches in Scotland were ‘legally’ executed. Next door are the rather more respectable ladies known as the the ‘Three Virtues’. Howewever, their beautiful appearance betrays one of Inverness’ greatest ever crimes!

The 'bouncy' bridge and Eden Court

We take along the River Ness and cross over the Infirmary Bridge, a.k.a the bouncy bridge. As well as being a beautiful bridge, it is also steeped in legend and your guide will regale you stories of the Brahan Seer, known by some as the 'Nostradamus of the North'. We'll also tell you some of the ghosts that live in our local theatre and point out the 'secret' palace!

We’ll take a stroll along the River Ness, passing by some of the beautiful Victorian buildings. However, their beautiful facades betray a less than beautiful past, with slavery and even the drugs trade being used to acquire the wealth to build them. We cross over the Infirmary Bridge, another beautiful Victorian structure, whose existence was prophesied long before it was ever built by the Kenneth Mackenzie, the legendary ‘Brahan Seer’. Across from us we’ll see the old ‘Infirmary’ from which the bridge took it’s name and we’ll talk about the popular advice that was issued when cholera struck in 1832. P.S Well done to the eagled eyed amongst you who spotted this a photo of the wrong bridge!

The Cathedral and the Drug Dealers House

We'll share some of our favourite tales about the Cathedral including the story of the poor horse that died during its construction.

Inverness Cathedral is one of our most iconic buildings and plays an important part in the more recent history of our ‘city’. We’ll find out why due to budgetary constraints we didn’t become a city, whilst towns such as Dornoch and Elgin did, and how we got our own back at the millennium when the Queen put things right! Next door is the Northern Meeting park, the world’s oldest Highland Games venue, and across the road we’ll see the one time home oft the Highland’s answer to Pablo Escobar!

These two iconic buildings hold a whole host of great stories. We'll point out some local 'wildlife' including a camel and an elephant as tell you about some of the great prison escapes from the local jail. Plus we will tell you how ironic it is that we have a 'McDonalds' slap bang in the middle of our city too! (hint - we didn't always get along with our West Coast cousins quite as well as we do now!)

The town house is not only one of our most attractive buildings, but also has many interesting stories attached to it

The home of the Loch Ness Monster

We'll delve into the history books and tell you why the Loch Ness monster should really be called the 'River Ness Monster'. We'll also show you some real life links to our most famous legend, including a 'monument' to the monster's arch nemesis plus the actual building in which the term the 'Loch Ness Monster' was coined!

The legend of the Loch Ness monster is known the world over, although the first mention of it back in 565 AD was actually in the River Ness! The monster has been self-isolating before it even became a ‘thing’ and is the undisputed hide and seek world champion. We’ll find out about more about our most famous of residents and recount some of the lesser known tales about her!

We'll take a look at one of our oldest buildings and show you why you shouldn't always believe everything you read. We'll also tell you about the important role the building played in the development of recycling in the Highlands!

Dunbar Hospital is one of the oldest buildings in Inverness, although the stone from which is built from dates back from much earlier buildings having been used on two separate occasions. Some would call it recycling, others might call it stealing! We’ll find out about one of the greatest building thieves of all time, Oliver Cromwell, plus we’ll share we’ll share with your one of our ‘secret’ locations where the stones where originally taken from in case you want to explore for yourself after the tour.

Our tour finishes at the Old High Church where we will recount stories of body snatchers and Jacobite executions.

The Old High church is a beautiful building, with parts of it dating back over 600 years. It is believed to be one of the earliest places of Christian worship in the Highlands too, with St Columba preaching from there in the 6th Century. However, in later history was not just a tranquil place of worship. After Culloden it was used a jail for Jacobites, who were summarily executed in the graveyard. We’ll also find out about the Victorian body snatchers, and tell a tall of why you shouldn’t go digging up other peoples bodies! Our tour concludes at the Old High Church and your guide will gladly answer any remaining questions you may have!

We have many other different types of walking tours available – see below for some other ideas.

Family Tour – If you’ve got kids and would like something to entertain them (and you!) then look no further!

A Taste of Inverness – Eat your way around Inverness as we dish out food linked to some amazing stories.

Why do the {WOW} Inverness walking tour?

Gordon founded WOW Scotland in 2010 and hasn’t looked back since. He loves talking about the Scottish Highlands, both on tour and on the TV and radio.

Sandy has been working in Scottish tourism for over 25 years and has been a key part of team WOW since 2014. His knowledge of the Scottish Highlands is outstanding and he delights our visitors on each and every tour with his phenomenal story telling skills.

Join us on our award-winning tours